I'm now sharing two letters (on two consecutive days a month ago) from the local MP, Amber Rudd, about the process of getting a community justice process in Hastings for those on the pier on 5th October last year.
It is hoped that at least one of those on the pier last year will write a letter to at least one of the 'victims' of that fire, so that it can be read out at the anniversary meetings:

Wednesday 5th October 7.30pm-10pm*
Film: Burning Bridges
(Followed by a discussion on what community justice looks like in Hastings/St Leonards)

Film: Burning Bridges
(Followed by a discussion on what community justice looks like in Hastings/St Leonards) 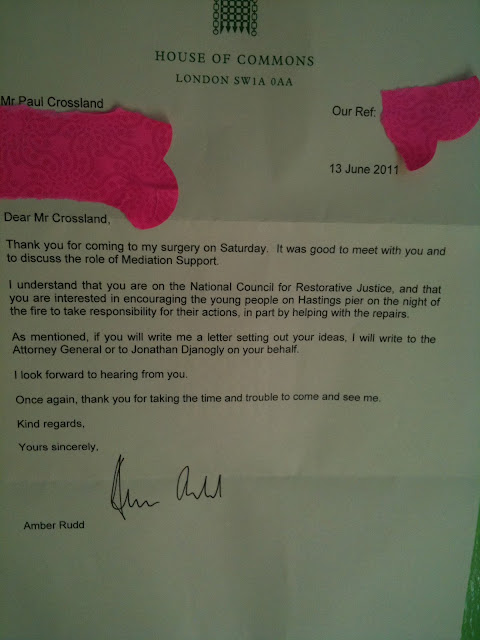 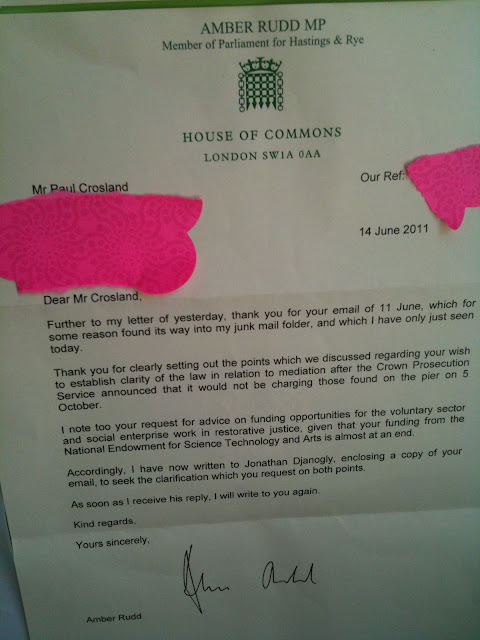 "Some years before I became a Criminologist, with a Masters Degree in Criminology from Cambridge University, I was a foolish young man at Oxford Polytechnic, where, amongst other things, I threw away my would be degree in Business Studies; focussing instead on political activism. Also politically active there was Jon Djanogly, now the minister for courts, so it will no doubt be an interesting set of correspondence or meetings that I have with him to advance the mediation process in Hastings / St Leonards in relation to the pier fire." (Paul Crosland, CEO, Mediation Support Ltd)

Jonathan Djanogly's much appreciated initiatives in advancing mediation in divorce law are reported by the BBC here; the main issue I have here though, is the exclusion of mediation work in Domestic Violence cases.
Here I disagree with the non-Domestic Violence view expressed by my colleague Maria in this interview on the Vanessa show:

To understand what role mediation can play in generating safety (& clarity) for family members in Domestic Violence cases may require a longer period of time than a TV programme like this can give it, and the case for mediation for all conflicts (other than those where 'the protective use of force' is required urgently) may better be progressed a stage at a time.

*Venue for both events to be announced in accordance with bookings
Posted by Paul Crosland on Tuesday, July 19, 2011 1 comments

They've got away with it?

Someone said to me that those who were on the pier last 5th October have got away with it. I seriously don't believe this for a second. I reckon they are suffering what we all suffer when we don't process our conflicts.
Another response to "they've got away with it" is that "No, Hastings & St Leonards communities simply haven't yet agreed a plan of action about how to get the justice they want."
Join in that process here, via the blog http://hastingsjustice.blogspot.com, at www.peoplesjustice.org.uk and/or via the Hastings Justice Facebook page.
Posted by Paul Crosland on Friday, July 15, 2011 1 comments